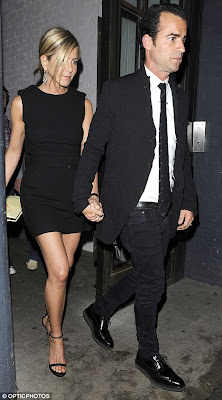 
Her love life has been the focus of much debate and Jennifer Aniston has certainly had her fair share of bad luck as far as relationships go.

But it seems as though the actress may have finally found love in the form of actor Justin Theroux.

The couple were pictured holding hands as they left Shoreditch House in London last night, following the premiere of her new movie Horrible Bosses.


Jennifer, 42, had changed into a sassy black LBD for her evening out with Justin, earlier in the day she wore a grey frock at the premiere.

The pair were still glued to each other today when they arrived at London's Heathrow Airport to catch a flight back to Los Angeles.

Jennifer looked summery in a white vest, jeans and flipflops and had accessorised with rather appropriate aviator shades and a stylish black bag featuring giant zip detailing slung across her front. 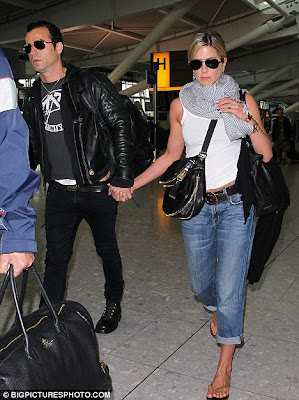 Don't let go: The pair were still holding hands tightly today as they arrived at London's Heathrow to fly back to Los Angeles 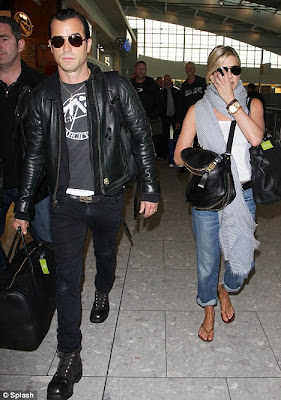 Skyward bound: The loved-up pair had to let go of each other to go through check-in and security 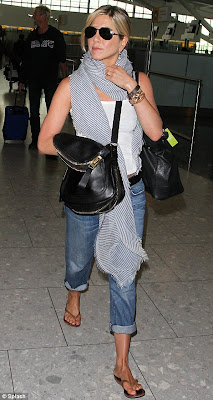 Bags of appeal: The star was sporting an unusual bag featuring gigantic zips that would have set the metal detectors pinging


While holding another black leather bag under one arm, she held on tightly to Justin with her other hand.

It's a step forward from the the start of the month when Jennifer was inducted into the Hollywood Walk Of Fame and her new boyfriend Justin Theroux was front row to support his leading lady.

Although she kept him hidden while she walked the red carpet at last Thursday's Horrible Bosses premiere in LA, Justin was pride of place at the drinks later that night - thought there were no PDAs. 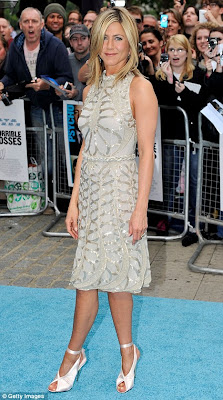 Grey day: The actress wore a subtle number to the premiere of her new film Horrible Bosses


After meeting up inside the premiere, the couple spent an hour and a half at the after-party before heading to the Chateau Marmont to meet friends, including Friends co-star Courteney Cox - and then got cosy away from prying eyes.

An insider told People magazine: 'They were super cute. He had his arm around her and kissed her on her cheek. They were whispering in each other's ears.'

It's also just been revealed that the pair are so serious that Justin has met Jennifer's father. 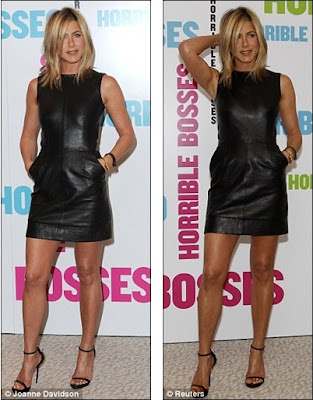 Outfit number one: Jennifer wore this leather number at the photocall for Horrible Bosses earlier in the day

An onlooker told them: 'She was smiling a lot, but you could tell this was a special event for her.'

The magazine said the party enjoyed a long lunch, sharing lobster bisque, Manhattan clam chowder, a crab dish and a four pound lobster washed down with a bottle of red wine. 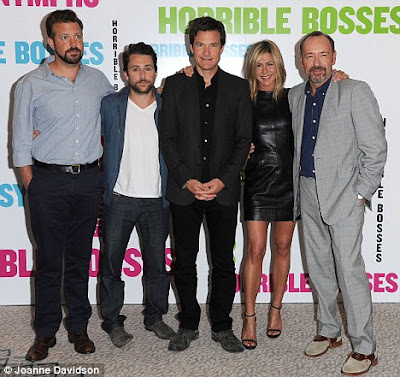 
Jennifer and Justin recently completed filming on the movie Wanderlust together, in which Jen plays one half of a married couple who branch out to make their relationship more interesting.

Justin, 39, is most famous for his screenplay writing having penned movies like Tropic Thunder and Iron Man 2.

In May Jennifer's representative said the couple were nothing more than friends after they were spotted dining out together.

'There were three other people at the dinner,' Aniston's rep told Us Weekly magazine.

'It was a friends dinner.'

'They are great friends,' a source also told People magazine of the couple.

'When Justin is in L.A. from New York, he and Jen have spent a lot of time together lately.'

'Jen was in a great mood and seemed happy to take Justin to her favourite restaurant,' the source says.

'They seemed happy and were flirty, but didn't act like a couple.'