Left bereft by their loss: Family's tribute to Amy Winehouse as fans create a shrine outside her flat 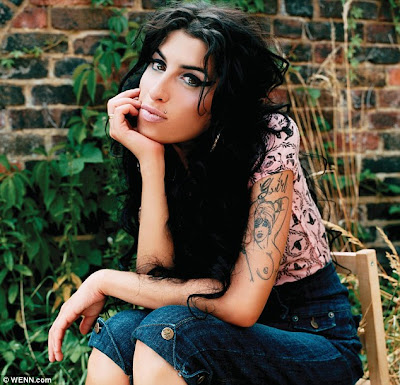 Grieving family: The Winehouse family said today 'Our family has been left bereft by the loss of Amy, a wonderful daughter, sister, niece'

A day after their beloved daughter, sister and niece was found dead in her flat, Amy Winehouse’s grieving family have spoken out about their loss.

The Winehouse family said today: ‘Our family has been left bereft by the loss of Amy, a wonderful daughter, sister, niece.

‘She leaves a gaping hole in our lives. We are coming together to remember her and we would appreciate some privacy and space at this terrible time.’

As the singer’s family cope with their grief, fans were paying tribute to the star by creating a shrine outside her North London flat in Camden.

From writing on footpaths saying ‘We love Amy’, to massive bunches of flowers lining the area outside her home, the tributes kept pouring in. 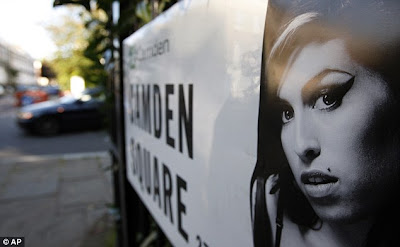 Camden tribute: Amy Winehouse's picture has been posted on a street sign for Camden Square near her London flat


Some friends and fans left bottles of alcohol, cigarettes and wine glasses at the scene, while others left photographs and portraits of Amy, who died at 27, next to candles in her memory.

A picture of the beehived soul-jazz singer was also stuck to an address sign in Camden Square near her home, in which she was found dead yesterday afternoon.

Many notes were also left, one reading 'Too fragile, too beautiful, too big a talent for this world', and another which said: 'To an exquisite singer with a beautiful voice'. 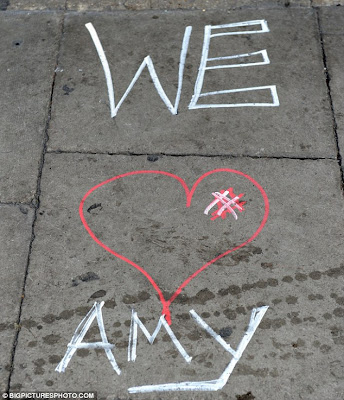 Fans' notes: Amy's grieving fans not only left her notes on paper but also wrote on the footpath to say they love her


Hundreds of mourners have visited the area of her flat and local pub to remember the star and fans also gathered at her favourite haunt The Hawley Arms in Camden last night after hearing the news.

Brand met her on the Camden pub scene a number of years ago, and said at first he thought she was ‘just some twit in a pink satin jacket shuffling round bars’.

He said when he spoke to her she was ‘sweet and peculiar but most of all vulnerable’.
By chance Brand saw her perform with Paul Weller at the Roundhouse in Camden, north London, and had an epiphany. 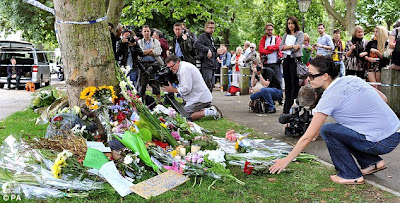 Tributes: Friends and fans of the singer lay down bunches of flowers, notes and candles by a tree outside her flat 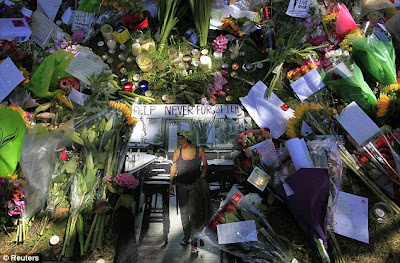 Never forgotten: Within the flowers and candles, a picture of Winehouse was left, saying RIP Never Forget


In the piece posted on his website he wrote: ‘Entering the space I saw Amy on stage with Weller and his band; and then the awe.

‘The awe that envelops when witnessing a genius. From her oddly dainty presence that voice, a voice that seemed not to come from her but from somewhere beyond even Billie and Ella, from the font of all greatness.

‘That twerp, all eyeliner and lager dithering up Chalk Farm Road under a back-combed barnet, the lips that I'd only seen clenching a fishwife fag and dribbling curses now a portal for this holy sound.’

Brand has given frank accounts of his battle to overcome drug addiction, and said loved ones will always fear getting a phone call with the worst news possible. 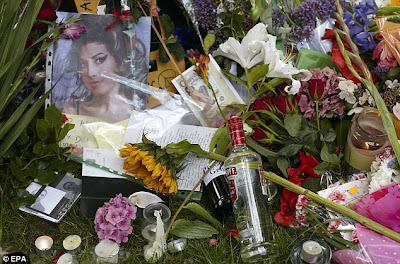 Amy's gifts: On top of the flowers and photographs, fans also left alcohol bottles and cigarettes for the party-loving singer 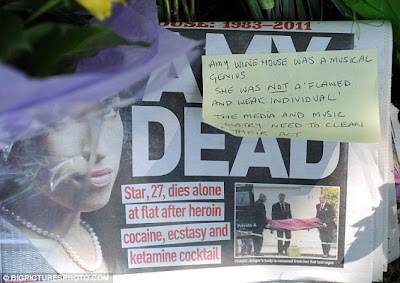 Today's news: A copy of a Sunday Tabloid was laid down 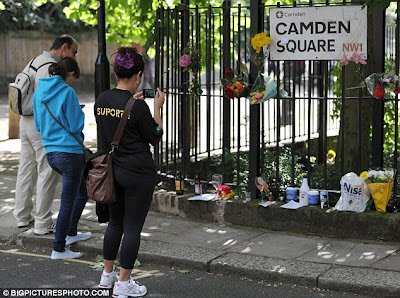 A day of mourning: Flowers were hung through a fence in Camden Square alongside bottles of alcohol and wine glasses


At the time he met Winehouse, he himself had not yet got clean, and he said: ‘Winehouse and I shared an affliction, the disease of addiction.’

In the piece Brand accused the media of being more interested in ‘tragedy than talent’, and therefore said they focused more on her personal battles than her musical career.

He went on: ‘Addiction is a serious disease; it will end with jail, mental institutions or death.

‘Now Amy Winehouse is dead, like many others whose unnecessary deaths have been retrospectively romanticised, at 27 years old.

‘Whether this tragedy was preventable or not is now irrelevant. It is not preventable today.’ 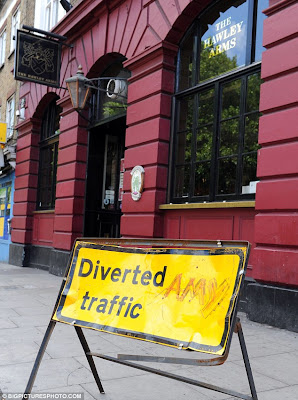 Her favourite haunt: Her name was written on a Diverted Traffic sign outside her local pub The Hawley Arms in Camden


‘We have lost a beautiful and talented woman to this disease. Not all addicts have Amy's incredible talent.

‘Or Kurt's (Cobain) or Jimi's (Hendrix) or Janis's (Joplin), some people just get the affliction. All we can do is adapt the way we view this condition, not as a crime or a romantic affectation but as a disease that will kill.’

Amy's management Metropolis Music also released a statement today saying: 'We are trying to come to terms with the death of a dear friend and colleague, the most amazing artist and talent.

'We will always remember Amy as a vibrant, funny, caring young woman who made everyone around her feel welcome. We have lost a very special person, part of our family.' 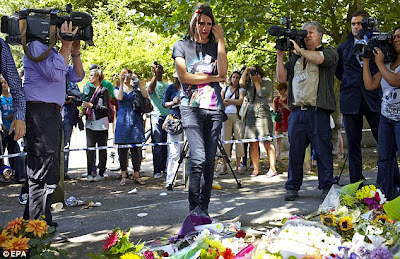 Mourning fans: A grieving fan wearing an Amy Winehouse printed T-shirt sheds a tear outside her home in front of cameras Leaving notes: Youngsters gather around the area of flowers to leave their personalised messages to the late singer


While the owner of her favourite pub The Hawley Arms said: ‘She was a special person with a good soul and this should not have happened. We will sorely miss her.’

Speaking on Friday night just hours before her death, Tony Bennett who had recently had a recording session with Amy, praised her talent.

While being interviewed on Radio 4’s Front Row programme, he said: ‘Amy was beautiful, she was something that I respect an awful lot, she was quite nervous. I met Sinatra and he was nervous too.

‘What I like about her is that she’s truly a good jazz singer, she’s not making believe it, she’s singing completely original and inventive. And I don’t know another young artist that does that.’ 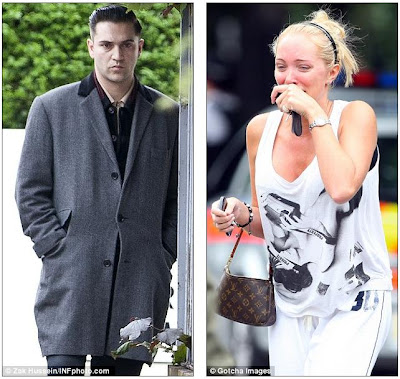 Tragic loss: Amy's on/off boyfriend Reg Traviss seen outside her house yesterday after her body was found and heartbroken friend of Amy's Aisleyne Horgan-Wallace also outside her home 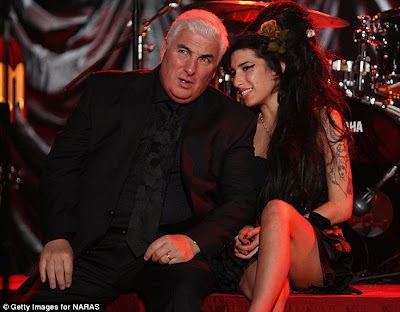 Close knit family: Amy with her father Mitch as they awaited the news of her Grammy Award in London in 200


The 27-year-old star, who had fought a long and well-publicised battle with drink and drug addiction, was pronounced dead after police were called to her £2.5 million three-storey home in North London.

Scotland Yard have said a post-mortem examination won’t take place before tomorrow and they cannot yet confirm the exact cause of death until the results are received.
But it has been claimed that she was seen buying drugs from a dealer in Camden just after 10:30pm on Friday night.

A source told The People that she was seen buying substances, believed to be cocaine, heroin, ecstasy and ketamine leading up to the hours before her death. 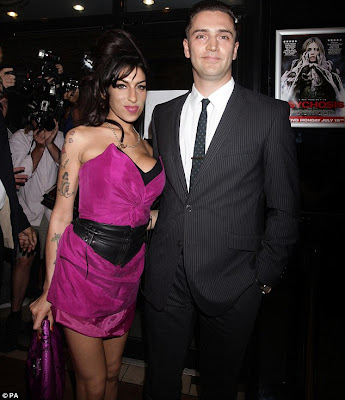 nconsolable: Amy Winehouse, who died yesterday, was said to be distraught about her split from film director Reg Traviss 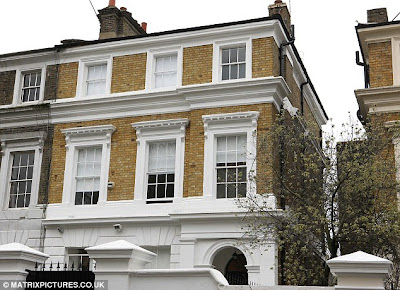 Camden home: Amy's flat in North London, where her body was found yesterday afternoon by police