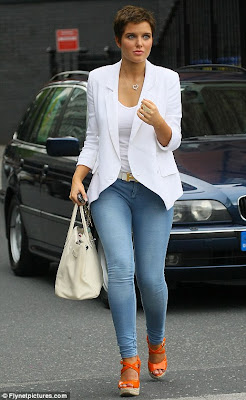 Tight fit: Helen Flanagan stepped out in tight and unflattering jeggings as she arrived at the Corrie studios


She has been criticised for wearing some truly awful clothes in recent years.

And the fashion police should have been out in full force to arrest Helen Flanagan again yesterday as made yet another wardrobe mistake.

The Coronation Street actress was snapped arriving on set yesterday in some very tight and very unflattering jeggings.


And she didn't look very comfortable in the light blue, fake-denim legwear as she tottered from her car to the studios.

The jeggings - which have been an unlikely fashion hit - clung to her curves in all the wrong places and did nothing for her bottom as she gave the cameras a view form behind.

And if they weren't bad enough, she teamed them with bright orange wedged sandals, a white T-shirt and jacket and a cream handbag.

Helen also looked rather orange, the result of one too many spray tans. 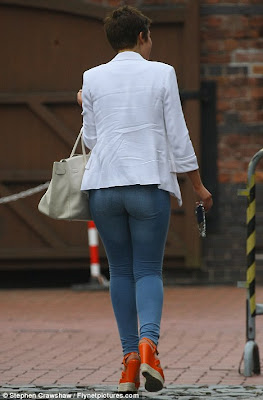 Clingy: Helen looked as though she'd had trouble getting into the legwear as she tottered into work


She even confirmed this as she took to her Twitter page two days ago after lunch with her footballer beau Scoot Sinclair.

She wrote: 'Sea bass and mozzarella and Rose wine at Alderly Edge bar and grill and my 3rd spray tan of the week.'

This promoted a couple of her followers to comment with one saying: '3rd spray tan? I've had one and I'm dark enough!.'

But clearly three fake tan sessions were not enough for the young actress, who wrote on her Twitter page last night: 'Just had my nails and tan done ready for photoshoot.' 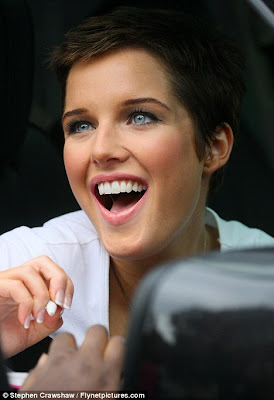 Nice to meet you! Helen laughed along with a fan who had stopped her to get an autograph


Helen, who plays Rosie Webster in the soap, has just returned to the show after a three month sabbatical.

Today she will be in London filming her three-part spin-off show, Just Rosie, alongside co-star Ryan Thomas, who plays her boyfriend Jason Grimshaw.

The special episodes, which will air on ITV.com in September, will show Rosie attempting to launch a modelling career after she lands a job as a model on Lorraine Kelly's morning TV show.

But she ends up in a catfight with a rival which turns her into an internet sensation, she then appears as a guest on on Loose Women before being interviewed by Johnny Vaughan and Lisa Snowdon on Capital Radio. 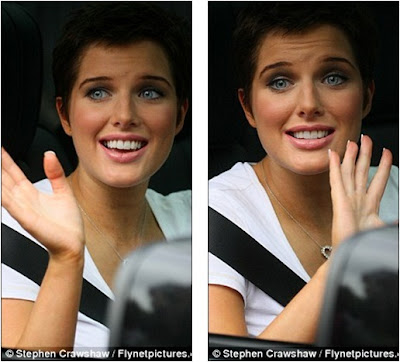 See ya! Helen waves goodbye to the fan - and the cameras - as she heads into work